A Day In San Jose 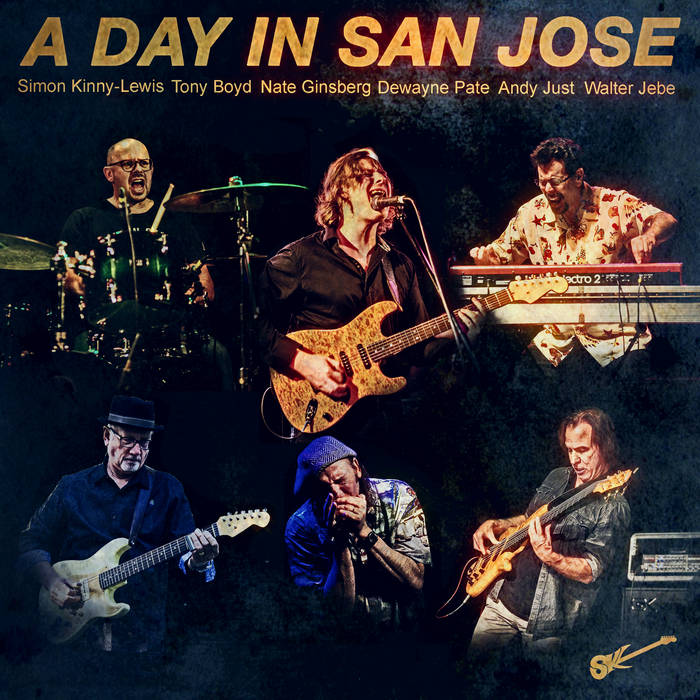 isometrus One of the best blues bands here. I'm really enjoying their music, excellent performance and perfect mastering of the tracks. Beautiful listening experience on both big speakers, headphones and my car stereo. Really have not any favorite track because I love all the album's "A day in San Jose","Catfish" and "Bad whiskey". Highly recommend,not only for blues lovers.

What a pleasure to hear my friends Simon and Tony cutting loose on a great set list of tunes while visiting Northern California. Besides the absolutely wonderful playing you can hear the smiles on their faces as they bust through this set. Great on all fronts. - Josh Smith

Simon Kinny-Lewis (SKL) is the full package. If you get the pleasure of seeing him live (either solo with his acoustic guitar, or with his full band) he beams with energy, soul and passion for the music. His vocals have been compared to Joe Bonamassa’s, but his overall style and delivery is unique and peppered with character. Also, Simon’s guitar playing is up there with the best guitarists of today, conveying all of the right elements that make an enthusiast satisfied, including tastefulness, technique and great tone.

Although one of SKL’s strengths is song-writing too (be sure to check out his albums ‘Street Blues’ and last year’s ‘Bad Whiskey’), we were ecstatic to hear that the next album would be Blues standards, classics and covers. And where would an Australian Blues-man go to record such an album? The Home of the Blues – the U.S.A., of course.

The successful and well received 2018 tour of the states saw Simon and his also Aussie drummer Tony Boyd team up with Californian musos Nate Ginsberg (keyboards), Dewayne Pate (bass), Andy Just (harmonica), and Walter Jebe (slide guitar), for a one day session at premiere studio Reeds Recordings. The resulting new album – ‘A Day in San Jose’ – is magnificent and a golden highlight in Simon’s discography.

It could have been a risky affair executing an entire album of covers of Blues classics. Blues purists might throw a phrase like: “Muddy got it right the first time,” but these are the closed-minded ones, scared of the new. What Simon is doing is paying tribute to some of his heroes, with the help of an experienced and respectful group of musicians. Nothing sounds old or tired either. Freshness circulates through each track as Simon offers every slice of his individual talent and energy to the performance, while keeping true to the soul of the originals.

We get a hard-driving ‘Crossroads’, before the laid-back cool of Robben Ford’s modern classic ‘Chevrolet’, followed by Blues favourites such as ‘Further On Up The Road’, ‘Hoochie Coochie Man’, ‘Rollin’ and Tumblin’’, and ‘Walking Blues’, the latter two of which are perfectly complimented and supported by the slide guitar skills of Walter Jebe.
Freddie King’s ‘Have You Ever Loved a Woman’ is carried along by Just’s raucous honking mouth-harp as the band swings and struts, before the album closes with a cover of Blind Willie Johnson’s gospel Blues masterpiece ‘Nobody’s Fault But Mine’. Led Zeppelin already had a turn with this song on their 1976 album ‘Presence’, but Simon’s arrangement of the song makes it the most impressive track on the album, sounding like no other cover we’ve heard of this song before.
Nate Ginsberg’s keyboards flow like a zephyr in the background, while Simon’s sustaining guitar pierces through in spires of tone. And leading towards the climax, we get an impressive and funky bass solo from Dewayne Pate.

Along with others such as Ray Beadle and Matty T. Wall, Simon Kinny-Lewis is a shining beacon of musicianship and talent on the Australian Blues scene, now making a crossover to pleased U.S. audiences. Awesome releases like ‘A Day In San Jose’ simply support that the Blues is still a genre of strength to keep your eyes and ears on. - Ethan Burke ( The Blues Source )

Mixed and Mastered by Simon Cotsworth

" Simon Kinny-Lewis ( SKL ) is the full package. His guitar playing is up there with the best guitarists of today " - BluesRockReview 2019